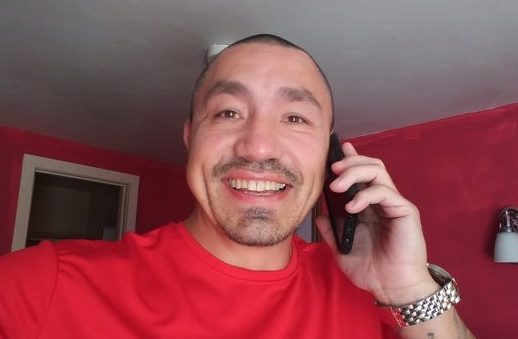 Michael Backman calls his wife on the day he was released from prison. Backman was a student in the UW Odyssey Beyond Bars program, one of several prison education initiatives that sparked his interest in writing. Photo courtesy of Michael Backman.

Michael Backman was 16 years old when he went to prison.

At the time, he could barely read or write, barely understand all the legalese floating around him as he dealt with the repercussions of the day in September 1991 when he drunkenly burglarized a home and killed a man.

In prison, he responded to discomfort and frustration the only way he knew how, lashing out until he was put in the “the hole,” or solitary confinement, with nothing to do but reflect and read.

It was during one of these confinements that Backman’s thoughts went to his son, then still an infant.

“I wanted to educate myself so I could give more of myself to my son,” he recalled. “I didn’t want my son asking the questions that I had as a kid and not be able to answer them.”

Backman picked up a dictionary and started reading. There were so many words he had been using wrong. So many he wanted to learn how to use.

He started to read everything he could get his hands on.

“It was euphoric. You could open a book and a world just awaits you,” Backman said. “It was phenomenal to me.”

Eventually, he enrolled in an English class offered by the University of Wisconsin-Madison to prisoners at Oakhill Correctional Institution.

The program was one of a handful that operated in Wisconsin state prisons. The programs serve roughly 2,500 people a year in a system that houses more than 20,000.

Now, there is cautious optimism nationwide that efforts to expand higher education offerings into prisons may be reaching a watershed moment, with bipartisan support.

One of the leaders advocating for the expansion is Tommy Thompson, who oversaw the largest prison boom in Wisconsin’s history as governor but now, as interim head of the University of Wisconsin System, wants to “turn a prison into a university.”

Thompson has been open about regretting his past enthusiasm for prisons, saying too many people are locked up for too long.

Key to that effort in Wisconsin is a $5 million plan to partner three University of Wisconsin campuses with three state prisons. If funded in the next UW System budget, some 300 to 500 inmate students will be able to pursue their bachelor’s degree from within those prisons. Thompson’s hope is to later expand the program to other schools and other prison populations.

“(We want to) give them that educational opportunity, to be able to rebuild their lives and become meaningful members of society,” Thompson said.

The state’s Department of Corrections is already considered a leader in using technology to help inmates learn.

At the same time, two technical colleges — Milwaukee Area Technical College and Madison College — are working to expand associate degree programs that allow students to transfer core liberal arts courses to a four-year program. MATC graduated its first 14 students this month, and has another 208 enrolled.

And this week, congressional leaders struck a deal on reinstating Pell Grants for people who are incarcerated, a move that, if passed as part of the latest COVID-19 stimulus package, would help students pay their tuition and ultimately fund the programs the colleges seek to offer.

While incarcerated, Backman took courses through MATC and UW-Madison that helped him improve his writing skills and build his confidence. He was released in September after 29 years in prison.

His writing helped him process the deaths of his son and his mother from behind bars. His studies helped him put words to the circumstances in which he grew up. And the classes and camaraderie with other inmate students gave him hope at times when he felt like he was standing in quicksand, unable to move forward.

Proponents of prison education programs say one of the key benefits is the long-term payoff for taxpayers. When a person is released from prison, they often lack the skills, support and confidence needed to transition back into society. Many end up returning to prison: nearly one in three within three years of being released, according to Wisconsin Department of Corrections data.

Although there’s not much fresh data on the subject, a well-regarded 2013 study by the RAND Corp. found people who participated in prison education programs had a 43% lower chance of ending up back in prison.

“Anecdotally, we find that people who engage in post-secondary education are purpose-driven, are less likely to cause or engage in dangerous or unhealthy activities, and are excited about their future,” said Ben Jones, the Department of Correction’s education director.

Lower recidivism rates and a more educated workforce are a win-win, Thompson and others argue.

Program director Peter Moreno came to UW-Madison’s Odyssey Beyond Bars program after more than a decade working as a lawyer for the Innocence Project. He also spent time learning about how other states were bringing college programs into prisons.

“When we have people coming out of prison who feel as though they have a broader set of options rather than a narrower set of options when they’re released, that impacts how they carry themselves, how they interact with their community, how they re-engage with their family and can completely redefine their lives,” Moreno said.

Kevin Mullen, who teaches a humanities course in prison though the Odyssey program, said he heard often from his students that they had been told they weren’t “college material.” But he said the students in the program were among some of the most diligent and hard-working he’s ever taught, and the course had a deep impact on him as an instructor.

“It’s hard to see a person fully when you’re judging them solely on the worst day of their lives. Many of our students have made mistakes, but that’s only a part of the story. They have so much desire to change, to have an active role in society, to be engaged with the community and family around them,” Mullen said.

Milwaukee Area Technical College may offer the best vision of what the future could hold if Pell Grant funding is restored to inmates. In 2016, MATC became Wisconsin’s first (and until this year only) college chosen for Second Chance Pell, a pilot program launched by former President Barack Obama.

Though MATC had been offering high school equivalency and trade certification programs for years, Second Chance Pell allowed it to begin offering an associate degree programs that focuses on liberal arts courses or technical skills. In turn, those credits could transfer to a four-year program — and the potential for a bachelor’s degree or other career paths. Currently, 208 students are enrolled.

MATC and DOC have worked together to improve virtual learning options. The department has used grant funding to give students a small laptop they can take to their cells to complete schoolwork and research.

This alone could be a game-changer for inmates, who can keep studying in their cells even if they miss class due to lockdowns or other limitations.

“The main focus of the prison system is security: to keep offenders secure and away from the community,” said Sadique Isahaku, who oversees prison education efforts at MATC and before that worked on education initiatives at the DOC. “As a result, getting in there to offer education in a face-to-face environment is very challenging.”

In December 2019, there were 23,692 people in Wisconsin’s overcrowded prisons.

Of those, only 5% of men and 8% of women held a college degree. Most had finished high school, and some had taken some college courses.

This is a confluence of inequities that, like so many others, disproportionately affects people of color. In 2019, 6.7% of Wisconsinites identified as Black, according to the U.S. Census Bureau, but Black Americans represented 44% of men and 22% of women in Wisconsin’s prisons, according to DOC data.

“It’s appalling,” Brian Walsh, a senior program associate at the Vera Institute of Justice, said of the racial inequities in Wisconsin’s prison system. Vera partners with MATC on some of its initiatives.

“We need to make sure that when people get out, they never come back again,” Walsh said. “This is about repairing those communities that have been destroyed by this disproportionality.”

Thompson said he’s already started talking to the DOC, Wisconsin Technical College System and local employers to start to get a sense of what types of programs should be offered through the UW System Prison Education Initiative and how they can collaborate.

Thompson is also working with the UW-Madison Odyssey Beyond Bars program, through which Backman took an English 101 course taught by Mullen. This spring, the program will add an African American studies course as well.

Backman is Ojibwe and grew up on a reservation. His family moved a lot, ultimately settling in Minnesota.

He was 8 when a teacher told him to sit at the front because “Native Americans don’t learn very well.”

His home life was filled with instability, violence and alcoholism. His uncles first handed him a beer when he was 8, and by 12 he was getting so drunk he would black out. He’d seen his stepfather abuse his mother, so when he heard the girl he was seeing was pregnant, he moved to Wisconsin to be with her. The birth of his son was a “life-altering moment” and he wanted to give his child a better life.

That same year, he killed his 80-year-old neighbor and went to prison.

While in prison, Backman took a variety of courses, but the ones that he loved the most were the writing courses that taught him the words for the conditions in which he grew up.

“It’s kind of hard to notice those cycles when you’re in them,” Backman said. “I was born into the cycles of alcoholism and violence and negativity.”

Nearly three decades later, Backman remembers his hands shaking as he pulled on his “street clothes” and got ready to be released from prison. Sitting in a car outside, he said a prayer for the man he killed — something he does every morning, asking for forgiveness.

In the months since, Backman has worked to rebuild his life. He got married to a woman he met three years ago and is waiting for approval to move to Texas to be with her. He learned how to use FaceTime — though he’s still a bit wary of technology.

He spends most of his day, starting at 8 a.m., writing. He wants to publish the books he started working on while in prison.

In the UW-Madison English class, Backman’s final assignment was to tell a story in front of an audience.

Remembering his own mother, he wrote a fictional account of a son and mother who made regular visits to a truck stop to buy lottery tickets. They never won, but it was a tradition they carried on even after she began to get sick. The man silently pleaded with the universe that if he won, he’d give it all away, just to spare his mother’s life.

After his mother died, the man returned to the truck stop and bought two lottery tickets alone. He went back to his empty home and sat on the couch surrounded by photos of her. He loaded a gun as the TV called out the winning numbers — they matched his mother’s ticket.

And as he sat there, a winning lottery ticket in one hand and a loaded pistol in the other, the man heard his mother’s voice in his head: “This is a crossroads, my boy. You can go wherever and do whatever you want. This does not define you.”

Backman’s audience was in tears.

Read the full article at: https://www.jsonline.com/story/news/education/2020/12/24/wisconsin-working-expand-college-education-prison-inmates/3858664001/