Each of us is unique and each of us has a unique story to tell and a different perspective of how we see life, even in prison.
— Robert, OBB class of fall 2021

In December 2021, alum Robert Taliaferro had a lot to look forward to – celebrating the end of a successful semester with Odyssey Beyond Bars, writing a feature for the Prison Journalism Project — and completing the last of his 38 years in prison. 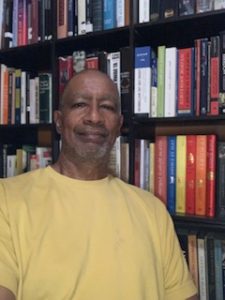 Nearly one year after being released from Oakhill Correctional Institution, Robert’s schedule hasn’t slowed down. He is currently living in Minnesota and enrolled in 16 credit hours at Metro State for a degree he plans to complete in May 2023. He is also enrolled in a mentorship certification course to help military veterans impacted by the criminal justice system.

“I have been attending Veteran’s Court proceedings since shortly after my release,” Robert told the OBB team. “The judges, prosecutors and coordinators of the program in Minnesota want me to become an official mentor.”

Robert isn’t new to community mentorship. From 1985 to 1989, he was the editor of The Prison Mirror, a newspaper out of Stillwater Correctional Facility in Minnesota. He’s remained active in prison journalism and has since written a book, Always Coloring Outside the Lines: Freedom for the Artist Within, to encourage other writers and artists who remain incarcerated.

As Robert completes the next leg of his education, he’s found himself at another crossroads: What comes next? Soon, Robert aims to attend graduate school. For now, his plate is plenty full while he completes a mentorship certification course as well as academic coursework for the fall 2022 semester. “Sometimes you wonder why all the work is being put in, and then you get those grades back from an exercise and you are that much closer to getting a degree.”

To support alumni like Robert on their educational journey post-release, please donate to the Friends of Odyssey Fund today!

Support the Friends of Odyssey Fund