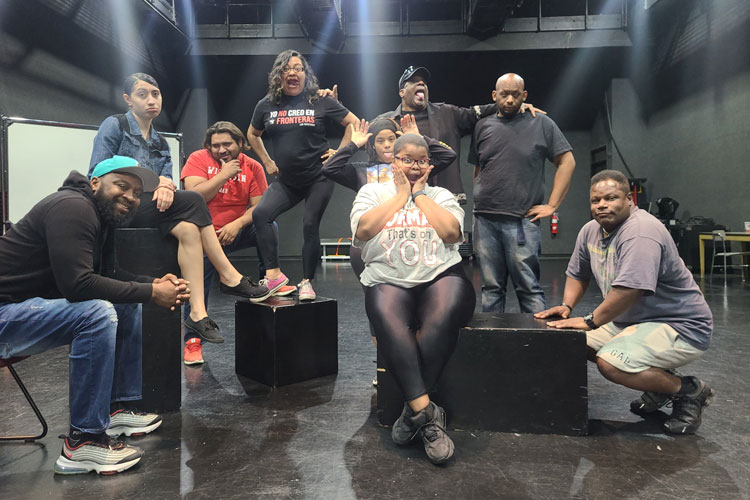 “How am I going to die today?” Loche asked herself as she entered UW–Madison’s Hemsley Theatre for Onward Odyssey’s first-ever Acting Techniques class.

Professor Baron Kelly notes of Loche and her nine classmates, “The students experienced an unexpected level of risk-taking and empathy and began coming out of their shells.” Fighting shaking hands and a quavering voice, Loche called the class “the scariest thing” she’s had to do, adding, “I’m more of a wallflower, but in theater class there’s no hiding and everyone participates. I sang ‘I Have Confidence’ from The Sound of Music to myself on the way to class every morning.”

In each of the 18 years since UW Odyssey Project began, Professor Baron Kelly has led students in scenes ranging from Shakespeare to Lorraine Hansberry, bringing students out of their shells through vocalizations and improvisations.

Last month, 10 alumni completed a 3-credit intensive acting course with him. Marisol found that holding the class in UW’s Hemsley Theatre was a “game changer,” making her feel like part of the UW and giving her a chance to use black blocks every day to create scenes. By pretending to be other people, she gained empathy and tapped into her power of imagination. “I gained knowledge and confidence, and it helped me see life with a different perspective.”

Spencer observes, “Taking Baron’s acting class was more enlightening and inspiring than I originally imagined it would be. My love for the dramatic and performing arts has grown exponentially. I will never see the craft of acting the same way. I learned the tools and tactics actors use.” Calvin reports that the activities forced him to tap into unknown parts of himself, leaving him stronger: “It really is an awesome confidence builder.”

Graduates of the class say they not only appreciate the craft of acting more but also can apply their new skills to their everyday lives. Loche’s boss told her she seems more poised and self-confident. “We did it!” Loche concludes. “I made it to the last class, and I am still alive. I really thought I was going to die! I missed being in my comfort zone, but being outside of it was not too bad. I got comfortable with being uncomfortable…in an effective way.”

We hope to make the Acting Techniques class an annual offering for our alumni. To support Onward Odyssey courses, donate below.