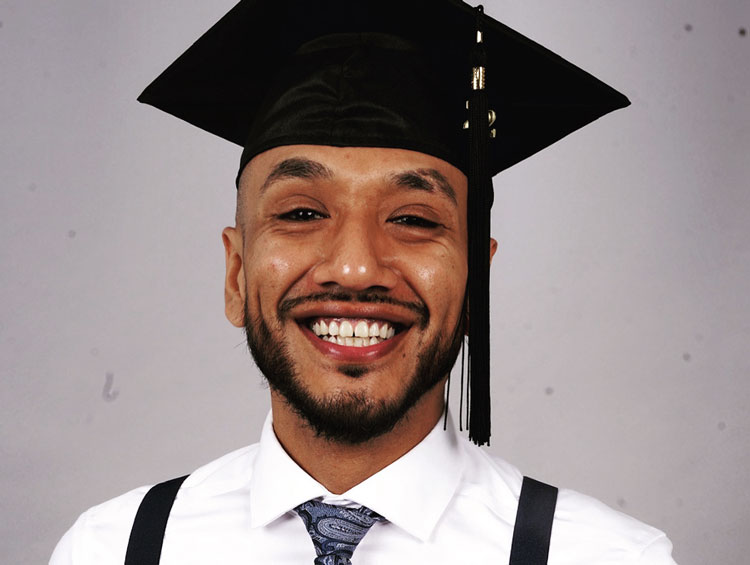 UW–Madison may be only an hour’s drive from the Huber Correctional facility, but for Michael Lozano, caught in a cycle of incarceration, it might as well have been on the moon.

By the time he was a teenager, Michael was a felon multiple times over. Those felonies became roadblocks to employment or anything else Michael tried to pursue to better his life.

“All anyone could see is my old record. I just kept pushing and hoping that I’d run into someone who would give me a chance. And I did.”

Michael credits discussions with his Odyssey classmates and instructors about writers and thinkers such as Frederick Douglas and Plato in helping him evaluate his life and what he was “doing to make it better.”

“I just wanted another opportunity to reinvent myself because the life I was living had no future,” Michael said. “If it wasn’t for Odyssey, I don’t know where I’d be.”

So where is Michael now? He’s at the University of Wisconsin–Whitewater, where he graduated with a bachelor’s degree in management and just earned an MBA last month, and is the newest coordinator for precollege programs. He works recruiting high school students who may experience barriers to college by providing resources to overcome them and creating a university culture that supports their academic success — much like the Odyssey Project once did for him.

“Odyssey really helps change people’s lives. It’s the support, love, and teaching we get that helps us see our potential — to see our place in the world and even to save a seat for us at the table. This program gives people like me a second chance that they would normally never get. I didn’t think I would ever go to college, let alone be alive to get my MBA.”