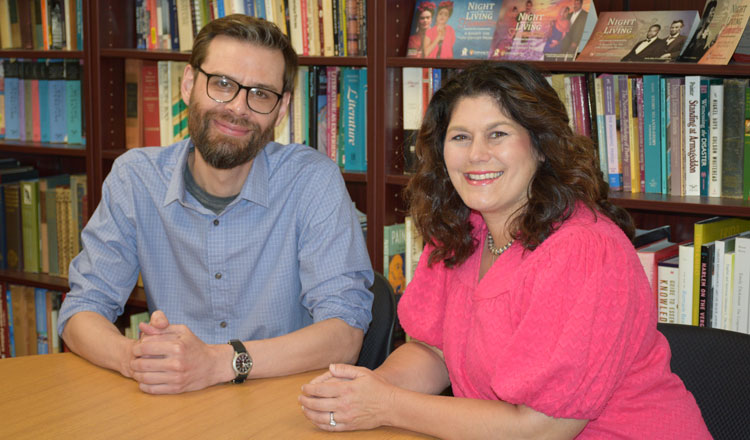 The Odyssey Project is excited to announce the addition of two new staff members/literacy instructors, Erin Celello and Ben Shannon. Both Erin and Ben trace their passion for Odyssey’s mission in part to a parent who was a first-generation college student, and both look forward to providing instruction for Odyssey alumni or Odyssey Beyond Bars students as well as intensive writing help for all Odyssey students through the Odyssey Family Learning Center. These two new hires were made possible by grant funding from the Endres Manufacturing Foundation, a federal appropriations bill, A Fund for Women, and individual donors.

Erin Celello comes to the program from the UW–Whitewater, where she was an associate professor in the Department of Languages and Literatures and taught courses in English composition and creative writing. She holds an MFA in fiction and a master’s in composition pedagogy from Northern Michigan University and is the author of two novels. Her second, Learning to Stay (Penguin/NAL) — about the wife of a combat veteran — was adapted for the stage in 2017 by Jim DeVita for Forward Theater. As a result of researching this novel, Erin became an advocate for veterans and veterans’ issues, developing veteran-specific and themed writing courses — a focus and passion she hopes to carry with her into Odyssey. She is happy to no longer have a lengthy commute from Madison to Whitewater, but most of all, she is thrilled to be part of the Odyssey Project’s mission of ensuring access to education for those who experience obstacles to it.

“My dad was a first-generation college student — the son of a plumber and a homemaker and one of seven kids, who went on to become an attorney and judge. He believed deeply in the transformational nature of education and instilled that belief in me, too,” said Erin. “I’m beyond honored to be a part of a program that isn’t just a piece of the puzzle to solving generational poverty, but a driving force in helping students claim their voices and a better life for themselves and their families.”

Dr. Benjamin Shannon didn’t have to travel quite as far to join Odyssey — joining the program from UW—Madison’s Department of History, where he was an award-winning lecturer, and a longtime volunteer instructor at the Oakhill Correctional Institution.

Ben grew up in Richland Center, Wisconsin, in the heart of the state’s Driftless Area. He received a BA from Winona State University in 2002 and an MA from the University of Tennessee in 2006. In 2020, he earned a PhD in History from the University of Wisconsin, with a focus on protest movements in the 1960s. In addition to teaching in UW–Madison’s history department, he worked for several years as a writing coach in the UW History Lab.

Regarding his new position at Odyssey, he says, “Like many students in the Odyssey Project, I had a challenging educational journey. As a first-generation college student with a learning disability, I struggled to meet the goals I set out for myself. Fortunately, I had the support of my family and others to help me along the way. I hope to provide that same kind of understanding and encouragement to the students at Odyssey.”

Outside of academia, Ben has an interest in local history, historical preservation, and the creation of neighborhood historical monuments in the Madison area.  He is currently helping his father, a Vietnam War veteran, create a memoir of his time in the service.

Ben will teach for the Odyssey Beyond Bars program and support the Odyssey Project’s academic tutoring and mentorship efforts. Erin’s initial focus for Odyssey will be offering introductory composition and creative writing courses for program alumni as well as assisting with public relations efforts and program communications.