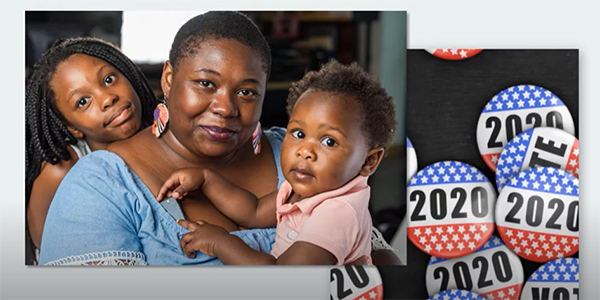 “I am a first-time voter and just cast my vote,” said one 63-year-old Odyssey student. Another in his early thirties admitted, “I didn’t vote four years ago . . . but now I will.” Both made the case for voting this fall at Odyssey’s recent event, “A Celebration of Voting,” held virtually on October 3. More than 100 people logged on for an hour of poetry, song, art, essays, dramatic readings, videos, and speeches on the importance of voting.

Mandela Barnes, Wisconsin’s first African American lieutenant governor, encouraged everyone not only to vote themselves but also to go out and find five others to vote. He praised the Odyssey Project for its role in the community:

“The Odyssey Project is such a crucial force and a critical force for good in our community at a time like this because it has transformed so many people’s lives. You all are on the front lines, literally, breaking down the barriers that far too many people face in the state of Wisconsin, especially communities of color. Part of the mission of the Odyssey Project is to empower students to discover the power of their own voice, to go out and change the world.”

League of Women Voters members answered questions ranging from where a homeless person may vote to when someone convicted of a crime can be cleared for voting. Odyssey student voices were the centerpiece of the hour as 23 Odyssey students and three Odyssey Junior teens shared winning entries from the “Why Vote?” contest.

Thanks to presenting sponsor CUNA Mutual Group and to additional sponsors Madison Gas & Electric, Summit Credit Union, Findorff, and the League of Women Voters of Wisconsin, all students received prizes for their entries.

If you missed “A Celebration of Voting” and would like to learn more, read our special voting edition of the Oracle, view sample videos on our Facebook page, or email program manager Emily Azad at emily.azad@wisc.edu for a link to a recording of the whole hour.