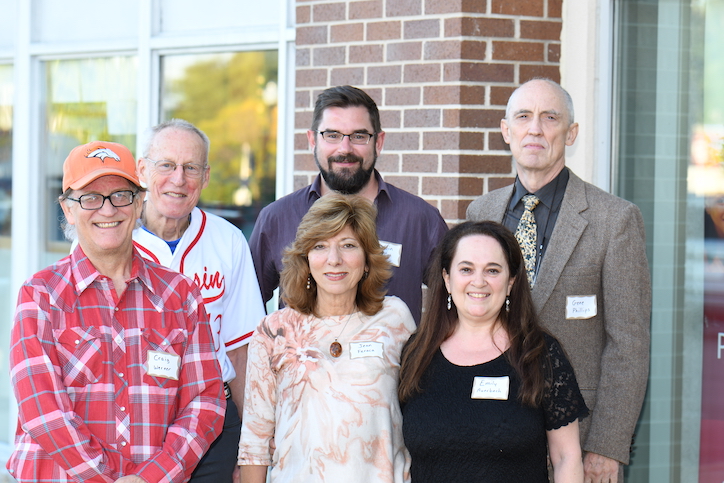 This article is part of a series of articles celebrating 20 years of the Odyssey Project. Follow along as we remember where we’ve been and look forward to where we’re going.

Since its first-ever graduating class walked across the stage in 2004, the University of Wisconsin–Madison’s Odyssey Project has centered students at the heart of its mission. Empowering students living in poverty to overcome obstacles, find their voices, and reframe their futures through its core 6-credit college humanities course, the Odyssey Project has continued to expand in its two decades, adding programs dedicated to students incarcerated in Wisconsin’s prisons and veterans, among others.

But there’s another group that’s been central to the program’s remarkable success: the instructors.

Comprised of experienced educators, professors, and learning specialists, Odyssey’s instructors bring more than subject matter expertise to their classes. They’re also on hand to offer encouragement and a sense of belonging to those who never imagined a college course would be possible. They connect with their students as instructors and advocates, helping them find their voices, develop academic confidence, and envision a brighter future for themselves and their families.

We asked a few of these instructors to share their take on the secret to Odyssey’s enduring success, along with a favorite teaching memory. Here’s what they had to say.

Veteran broadcaster and reporter Jean Feraca has been with the Odyssey Project from day one. An interview on her Wisconsin Public Radio program with Earl Shorris, creator of the Clemente Course in the Humanities, inspired Feraca to cofound a similar course in Wisconsin with UW–Madison English Professor Emily Auerbach. Since then, Feraca has instructed hundreds of Odyssey students in philosophy and civic engagement.

“The secret [of the Odyssey Project] is Emily Auerbach herself, who never gives up on anyone and is a natural mother hen,” Feraca says. “That said, it’s the humanities that make the magic. Whether they recognize it or not, what everyone wants from an education is meaning. That’s what the humanities provide, and that’s what gives students a reason to transform their lives.”

Feraca recalls Ramiah Whiteside, an Odyssey student incarcerated at the Wisconsin Resource Center, as particularly impactful in her teaching experience.

“I’ll never forget reading his response to the question we ask after teaching Plato’s ‘Allegory of the Cave’: What was the cave you were born into that led you to this cave?” Feraca recollects. “Ramiah wrote, ‘Being black was a cave. Being white was a cave. Being Indian was a cave,’ and went on with his litany until he reached nearly 100 responses.”

Whiteside was a college student at the University of Northern Iowa, having achieved prominence as associate director of EXPO working on behalf of formerly incarcerated men and women, when he died unexpectedly in December 2022.

“His funeral in Milwaukee was attended by people from all walks of life including many of his former cellmates who waited in long lines to share how Ramiah had saved their lives,” Feraca notes. “He was a hero and a role model who raised awareness of the plight of those incarcerated in Wisconsin prisons.”

As an assistant professor of continuing studies, Kevin Mullen is interested in how writing can expand access to higher education for low-income adults. For nearly a decade, he’s served as an English and writing instructor for the Odyssey Project and today is the director of adult education and the first instructor for Odyssey Beyond Bars.

“One thing that has deeply impressed me from my first day with Odyssey is the strength of the community that forms in the classroom,” Mullen says. “Our students come from a wide range of backgrounds, ages, and cultures. On that first day of class, they are all strangers to each other. But over the course of two semesters, they grow into such a tightly knit group.”

Mullen says the process unfolds in the classroom as students respond to texts and one another, gradually layering in their ideas and personal experiences.

“Some of the things they share are difficult or even painful, but as they take the risk of telling their stories, the group inevitably responds with thoughtfulness, care, encouragement, and support,” he adds. “As the weeks progress, that network of support becomes a core strength that buoys each individual, helping them to continue to overcome obstacles and carve a path through higher education.”

A favorite teaching story comes from his English 100 course at Oakhill Correctional Facility, where his students are invited on the last day of class to tell a “5-Minute Story” in front of classmates, friends, family, and community members.

“One student, Mark Español, told a powerful story about a particularly tumultuous day in his life as a five-year-old kid growing up in Brooklyn,” Mullen recalls. “It made a huge impact on the audience, and several people came up to him afterward to congratulate him on writing and delivering such an emotionally charged story.”

When Español was released from Oakhill a few months later, he contacted the Odyssey Project to reconnect. Staff told him about a Moth StorySlam event that would be taking place a few days later and encouraged him to come.

“Before he knew it, his name was called and he was on the stage telling a story, which he composed on the spot in front of hundreds of people,” Mullen says. “The audience was blown away, and he won the competition — just four days after being released from Oakhill.”

Español is now a student in the core Odyssey course and is focused on continuing his education to earn a master’s degree in social work.

“His strength, perseverance, willingness to take risks, and desire to help those in the community who need it the most remind me of the transformative power of finding your voice and realizing the impact you can make on the world around you,” Mullen says.

One of the Odyssey Project’s newest instructors, Erin Celello already feels like a full-fledged member of the program’s collaborative community. A published author of the novels Miracle Beach and Learning to Stay, among other writings, Celello serves as a literacy instructor and director for Odyssey Beyond Wars, a two-semester program for veterans interested in furthering their education.

She says Odyssey’s success can be summed up in one word: family.

“From Emily Auerbach’s father, Bob Auerbach, playing piano at Odyssey events to Odyssey Junior and the multigenerational aspect of the program, family really is at the very heart of the program and shows up everywhere in it,” Celello says. “The Odyssey staff functions as a family, with each person invested in doing everything they can to contribute to the program’s — and the students’ — success.”

“While Bob Auerbach played piano, welcoming the crowd, a small group of staff — including a new tutor — worked to troubleshoot issues with the Zoom feed,” Celello says. During the event, former and current Odyssey students read from their “Why Vote” essays, and two former students performed a song they wrote nearly a decade ago when they were in Odyssey together.

“Supporters, donors, staff, students, and their families all mingled throughout the night and came away feeling more connected than before — feeling like they had experienced something, shared something, together,” she notes. “Magical is honestly the only way to describe that evening.”

Learn more about the UW Odyssey Project or email odysseyproject@dcs.wisc.edu for more information.